After examining the documents of Hudson Bayou Basin Master Plan and Strategic Plan for Affordable Housing, we believe that the County should remove the parcel at 899 School Ave. from the surplus property list. We believe that this parcel which includes detention ponds and the Euclid Canal should never be sold but should be retained for stormwater infrastructure as was the original intention. Making both sides of the Euclid canal private property while retaining an easement creates unnecessary risks and uncertainty over safety and security for adjacent property holders.

The two smaller “flatland” sections on either side of Shade Ave. could potentially offer a site for housing which, if conditions can be met, could be separated from the larger parcel and sold separately.

This long narrow strip of land is, however, unsuitable for the 45-lot housing development as described in the Collier Report and would require massive and costly infrastructure changes. Development would increase flood risk, silting and pollution of Hudson Bayou. This land should be preserved in public hands as we face an uncertain climate future.

DESCRIPTION OF THE PARCEL

The 9.3-acre parcel in question is registered at 899 School Ave. but in fact is a long narrow strip of land parallel to Hatton Street running from School Ave. past Shade Ave to Euclid. It includes the Euclid Canal. (see accompanying map).

HISTORY OF THE PARCEL

In the early 90’s in response to flooding and stormwater runoff leading to pollution of Sarasota Bay, a report was commissioned.

In 1994, The Hudson Bayou Basin Master Plan was prepared to deal with the practical and environmental problems of stormwater runoff in the 1545 acres which drains into Hudson Bayou. The report offered remediation options. Two projects that were recommended were the construction of three detention basins adjacent to the Euclid Canal running between Euclid and School. These basins would help to control flooding but would also reduce silt and have an important secondary function of the biological uptake of nutrients. They predicted that “these facilities will result in a 30% reduction in total sediment loadings to Sarasota Bay.” (see drainage map)

This property was owned by the Sarasota School Board. In the fall of 1999, the School Board transferred the nearly 5-acre eastern section from Shade to Euclid to the County for the express purpose of the “construction and maintenance of stormwater improvement.”   In the summer of 2003, the second 4.3-acre section was transferred to the County for the same express purpose.

The detention areas were subsequently constructed, one enclosed by a chain link fence, the other two smaller ones open.

In 2008, there was a proposal to build 40 condominiums on the two flat areas flanking Shade Ave. However, these areas would remain County property but would be leased to the developer for 99 years. All of the water resources including ponds and the Euclid Canal would also remain the property of the County. This proposal was abandoned due to the cost of new and reconfigured utilities, poor management and the Great Recession.

​This report was published on December 30, 2019 and examined 11 sites for potential development of affordable housing. Eight were considered unsuitable for various reasons. Three were recommended. Site number 11 is the same parcel which had been transferred from the school department. Colliers envisioned up to 45 units being built on the entire site.

Colliers International, an international, Canada-based real estate firm, erred in including Site #11, 899 School Ave as “best suited” to affordable housing development. The report omits critical information, is misleading, contains factual errors and applies inconsistent criteria in assessing suitability of each site. This report did not accurately describe the site and the potential hazards of flooding and pollution of Hudson Bayou/Sarasota Bay if this land is developed.
CONCLUSION

This narrow strip of land is a critical part of flood control and maintaining the health of Hudson Bayou/Sarasota Bay. To allow building on the entire parcel and private ownership of both sides of the Euclid Canal will jeopardize property and the health of the environment.  Even building in the small flat areas of this parcel will create more impermeable surfaces and would require enlarging detention areas.

There are over 1000 County owned properties with the use listed as “drainage,” yet this is the ONLY parcel listed as surplus and proposed for sale.

We believe that this property including detention ponds and the Euclid Canal should be removed from the surplus property list and retained by the County as part of its stormwater flood control system. We believe strongly that the property should be held in fee simple and not merely with the limited right to use though an easement.

If the “flatlands” are considered for affordable housing, this much smaller site may or may not prove to be suitable. It would be difficult to build in that footprint. In fact, the canal has been widened and the actual site may be significantly smaller than indicated on plat maps; a survey would be required.

We would also recommend that any housing proposal consider the character of the neighborhood and its unique challenges, such as the practice of parent pick-up from the schools, which backs up traffic along Hatton St., and increased traffic congestion now that School Ave. is closed.

Therefore, our two alternative recommendations are: 1. Remove the parcel from the surplus list and retain it as a water management area. 2. Separate out the possibly buildable flat areas flanking Shade for sale while retaining ponds and canal in public hands. 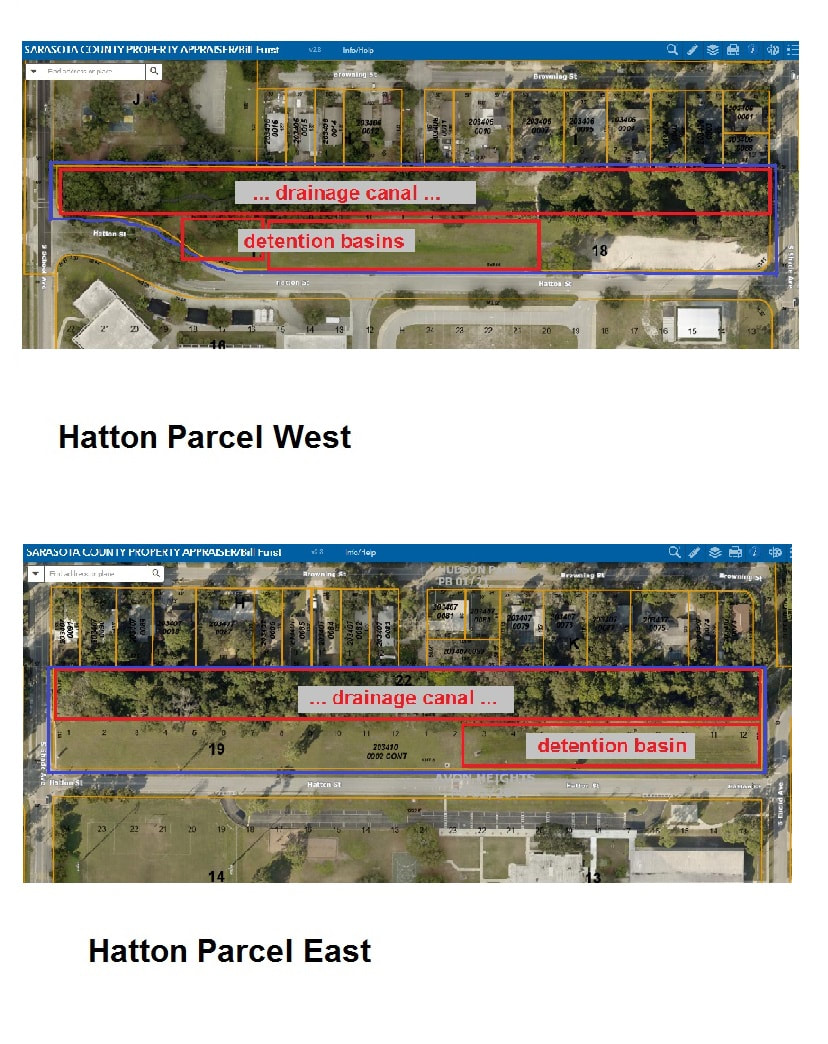 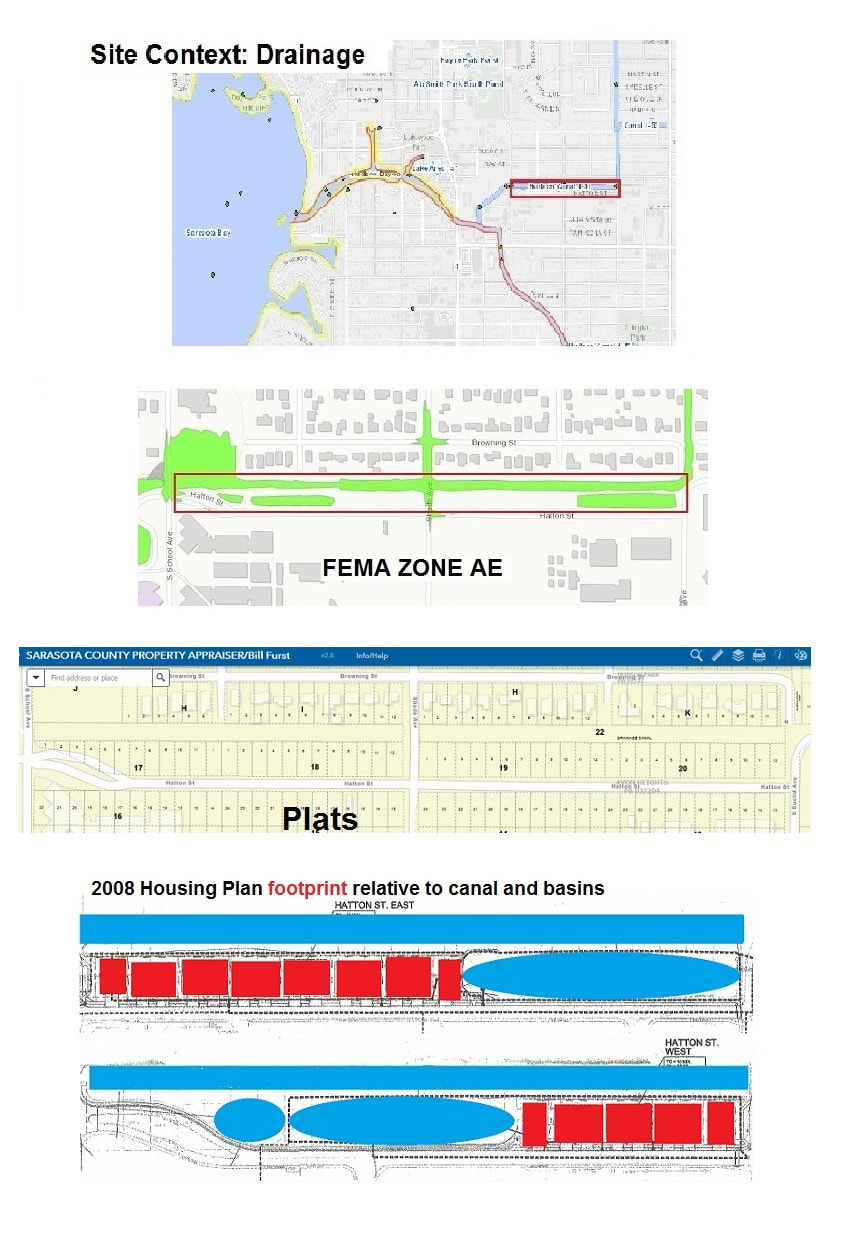