A LITTLE HISTORY of things pertaining to the Alta Vista neighborhood

The Preserve Payne Park folks have created a nice, concise timeline history of Payne Park (scroll to bottom of page).


Did you know:  Payne Park, originally a spring-training baseball field and short-term travel trailer park and camp, morphed into a massive, seemingly permanent, mobile home community.  As early as the 1960s, Christy Payne called out the City on this use, inconsistent with the original terms that the Paynes had written into the deed of sale of the land to the City for a P...A...R...K.

The clubhouse for the trailer park community, built in 1962, was the go-to place for live orchestra music and dancing. This eventually became the Payne Park Municipal Auditorium, utilized until 2021 for neighborhood meetings, many special events as well as private events and celebrations.

Ed Smith Stadium replaced the old Payne Park baseball field in 1989.  Starting in the late 1980's, the City worked towards closing and eliminating the Sarasota Mobile Home Park, evictions and lawsuits happened, and by 2003, with the last of the residents and their mobile homes removed, the land was reworked into a public park.

Apparently, in 2008, there was discussion of luring the Boston Red Sox back to Sarasota, with some people intent on repurposing a portion of the renewed park (kind of where the tennis courts now are) for a 10,000 seat stadium. This incursion was not to happen.

In 2019 and onwards, a similar plan to repurpose part of Payne Park, 7 acres, for a new music center for the Sarasota Orchestra, was meeting opposition from many users of the park. 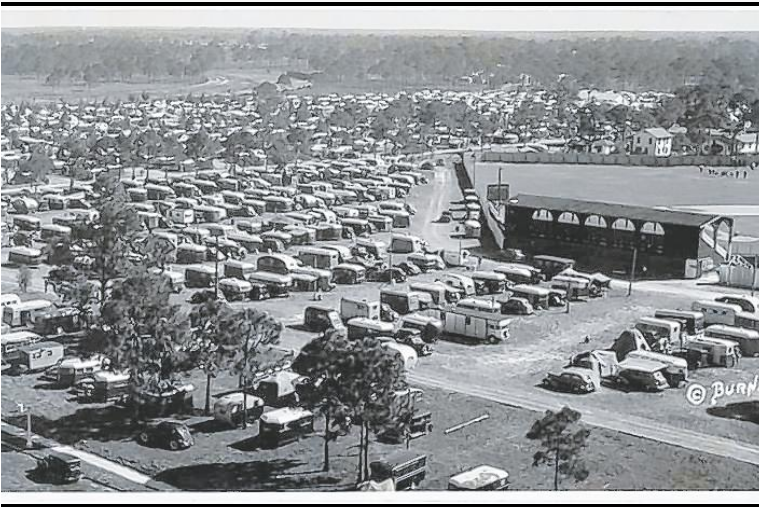 In 1925, the Paynes deeded 60 acres to the City; 20 were sold to purchase the site of Bobby Jones Golf Course, and 40 acres became Payne Park.

A baseball stadium was built,

and also an RV park, utilized by the "Tin Can Tourists" during the depression,