LEGACY TRAIL EXTENSION to downtown Sarasota
For detailed information about the Legacy Trail extension to Sarasota, see the Friends of the Legacy Trail site (Trail Extension menu item) and/or Sarasota County  website for Legacy Trail .  This County website has an option for you to sign up to receive future updates.

January 2021 Update:  Construction is now underway on all 3 segments of extension.
A couple of Info Tidbits regarding details of the segment in Alta Vista neighborhood (a part of Segment 3)

Right now, there's a gap in the sidewalk along School Ave there, at the southern end of Payne Park; that will be remedied as part of the Legacy Trail project.

(And eventually, plans are in the works for a further northern extension all the way to University and SRQ Airport.)
Info Tidbit:  I asked about plans for the existing traffic light on School Ave at "Shopping Way" (which has been a blinking light since the Ringling Shopping Center was deconstructed, and had been slated for removal). City Engineer Dan Ohrenstein is a point person on this; he has met with Payne Park Village developers, who had granted an easement between the rail ROW (to become the Trail) and School Ave, where Shopping Way once was a street (it is actually private property). The easement will be developed as a Legacy Trail - Payne Park connector, as part of Trail construction. (Construction of this Legacy Trail connector is NOT the responsibility of Payne Park Village developers.) Mr. Ohrenstein informed me that the fate of the traffic light also will be decided as part of the Trail construction project, as one of the street crossing details.
A few update details from November 2019 public meetings:

Construction of all 3 sections of northern extension (Culverhouse to Ashton, Ashton to Bahia Vista, and Bahia Vista to Payne Park & Ringling Blvd) will overlap.  Construction (excepting planned overpasses over Clark and Bee Ridge, which will function with regular crossing lights UNTIL the overpasses are constructed, est. 2024) is now expected to be complete sometime in 2022 !  There will be HAWK crossing lights at other street crossings . There are something like 18 street crossings (both small and large streets) in the northern extension.

For the NorthPort connector, Venice to NorthPort  part will be on-road bike lane, part MURT, and for the rest there will be 3 routes: one will be paved, and the two that run through conservation land preserves will remain unpaved. 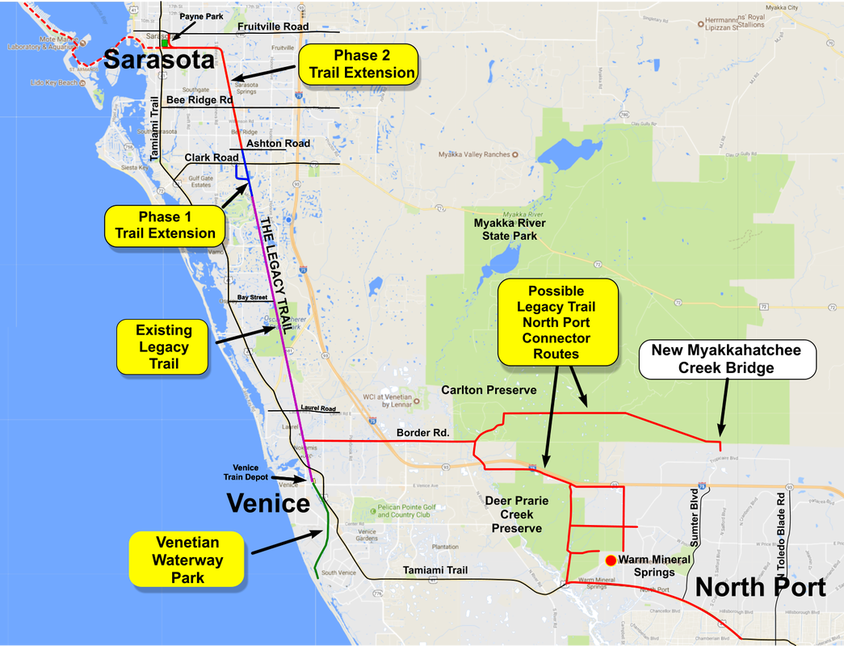 (older) map of planned extension
This website was created for sharing information among people in the Alta Vista neighborhood.
It is independent of the Alta Vista Neighborhood Association (AVNA).